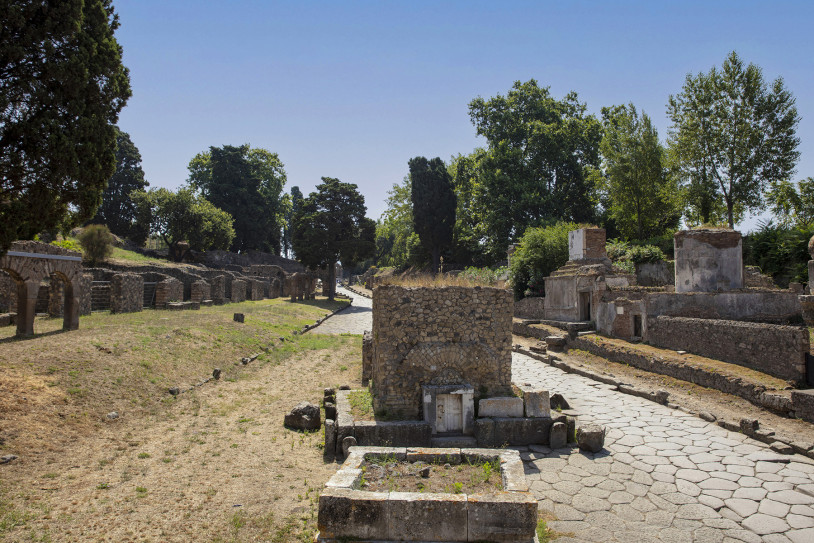 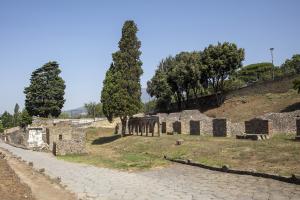 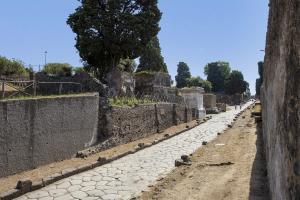 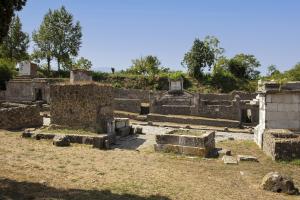 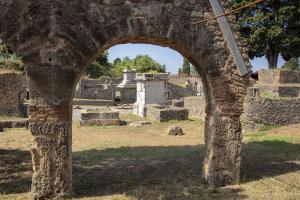 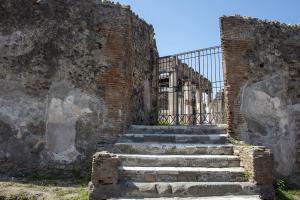 The impression left by a woman’s breast has disappeared into thin air. The cast was taken from a body that was buried during the eruption in AD 79 and unearthed in 1772 in the Villa of Diomedes, where the compact debris made it possible for the excavators to see the entire figure of the dead woman, her clothes and even her hair. However, the only part they managed to extract was the breast, when they recovered the impression left by the body in the hardened ash of the pyroclastic flow. This was thanks to an intuition that was superseded a century later by the revolutionary method of plaster casts, developed by Giuseppe Fiorelli. This method gave volume to the bodies, reproducing the poses they were in at the moment they met their death, like the embracing couple who appear in a scene in Roberto Rossellini’s Journey to Italy (1953).

Put on display after its unearthing in the nearby museum in Portici, the breast soon became an attraction that fired the imagination of travellers, writers, and artists. The novel Arria Marcella. Souvenir de Pompéi, written by Théophile Gautier in 1852, focuses on this fragment of a breast, which fascinates the young protagonist Octavien to the point that he goes to visit the exact place where it was found, in the Villa of Arrius Diomedes. A mysterious spell transports Octavien back in time and he finds himself in the city before it is destroyed by the volcano, and here he meets and falls in love with Diomedes’ daughter, Arria Marcella, the girl whose breast it is. The story ends with an exorcism performed by her father, who is incensed at his daughter’s licentious behaviour. This effectively closes the time portal that had been opened by Octavien’s amorous obsession with Arria, who goes back to being just a cold shape impressed on the ash. Despite its fame, the cast vanished into thin air, and its memory is entrusted purely to the literature it inspired. One possible hypothesis is that a series of invasive tests carried out by inquisitive nineteenth-century scientists ended up damaging and destroying it. One of the last people to see it was the naturalist Arcangelo Scacchi who, with a now coldly positivist attitude, and not without irony, wrote in 1843: “I was shown an irregular impression, which I was told was that of a woman’s breast; if they had not told me, I would certainly not have guessed, but out of courtesy I believed them.” 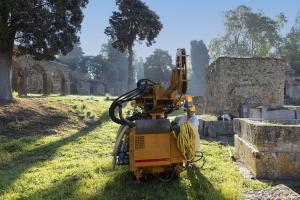 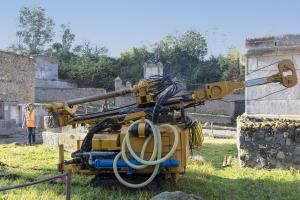 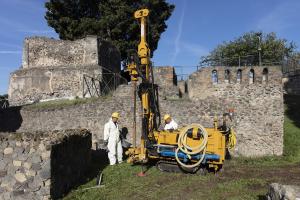 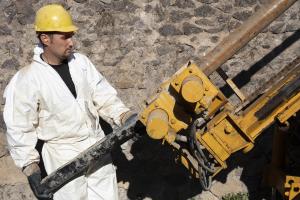 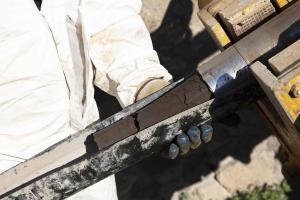 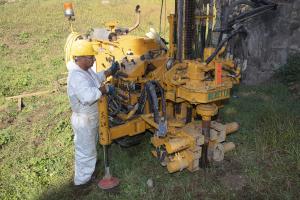 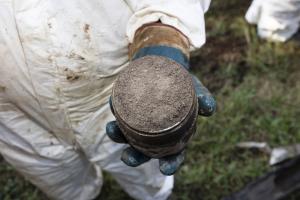 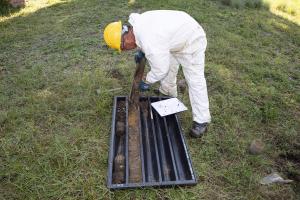 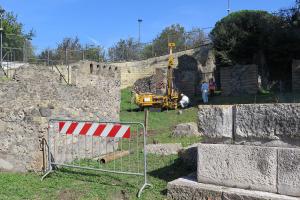 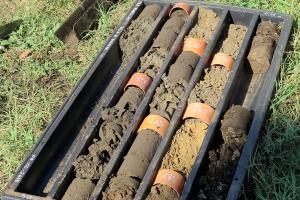 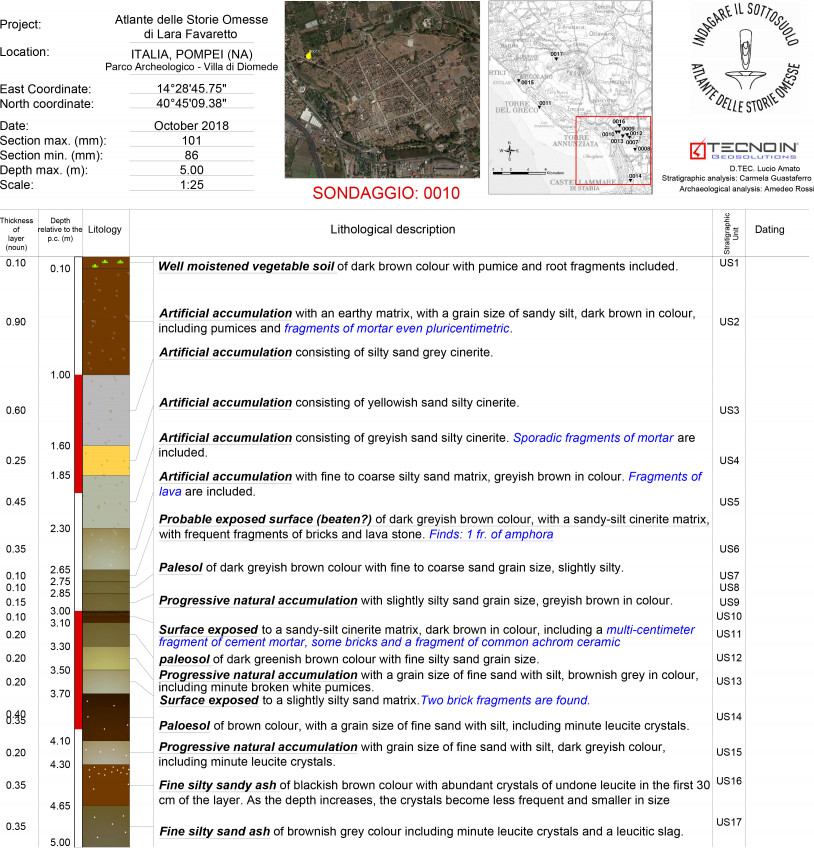 The 0010 core sampling point is inside the Archaeological Park of Pompeii, near the Villa of Diomedes. It is located in the external sector by the Herculaneum Gate, in front of the portico on the north-eastern slope of the Via dei Sepolcri. The last shop but one (no. 29), where the core sampling was made, has been identified as a potter’s workshop, connected to other work premises.

During the 2015 excavation campaign conducted by French archaeologists from the J. Bérard institute, three casket-type tombs in Sarno limestone were found to the west of the shops The finds showed evident alterations made in the nineteenth and twentieth centuries, when the area was first excavated, and then by bombing in 1943, definitively compromising the most recent stratigraphy. The burials, for example, were covered with a layer of grey clay mixed with recent materials (aluminium foil, barbed wire, etc.). This layer rests directly on a yellowish-brown silty substrate.

Down to -2.65 m below ground level, the 0010 core sampling site contains a series of artificially accumulated ground levels (UUSS 2-6) of the present age. These were laid during the original excavations and by the 1943 bombing raid, which was followed by several operations to arrange the area. These layers cover a man-made compacted earth surface at -2.65 m below ground level (US 7); other tamped levels are found at -3 (US10) and -3.5 m (US 13). These may be from different periods of use as a road on the south-east, found in a stratigraphic sample carried out in 2016. This showed that, during a previous period, the Via dei Sepolcri had gone in a different direction from the current one, probably due to the agricultural divisions adopted in the area north of Pompeii, which are still preserved in the orientation of the suburban Villa of Diomedes and Villa of Mysteries.

Below the archaeological layers and down to 5 m below ground level, there are pyroclastites containing leucite crystals. This mineral, which is characteristic of the volcanic substrate, suggests that the deposits come from the alteration and erosion of the lava bed. 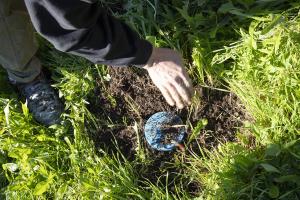 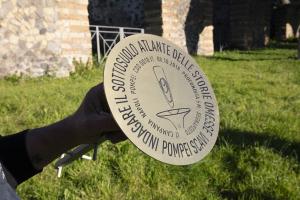 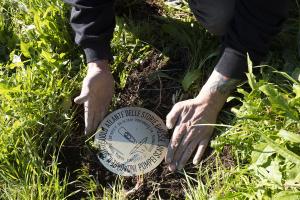